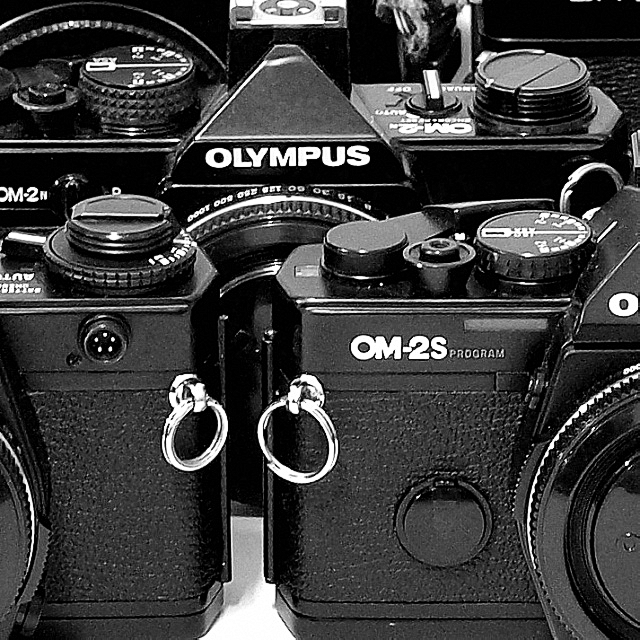 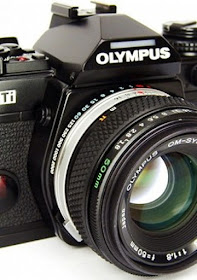 The first model was the all-mechanical M-1, which came with a full-aperture TTL Cadmium-sulphide (CdS) exposure meter, and a very large diameter bayonet lens mount, which was later renamed OM-1, and correspondingly, the OM System.

Designed by Yoshihisa Maitani, then the chief designer for Olympus, the main bulk of the design was a very compact advanced system camera which was accompanied by a series of equally compact and outstanding Zuiko-branded lenses, and a wide selection of accessories that makes up the professional system.

While the single-digit system caters to the professional market, optimized for features and ruggedness rather than ease of use, Olympus also addresses the consumer market with the two-digit series bodies which are lighter, more automatic, and geared more toward the photo hobbyist. Models in this series include the OM-10, OM-20/OM-G, OM-30/OM-F, and an OM-40.

Not just a series of cameras, but a whole system designed from the ground up by the design genius Yoshihisa Maitani. Lenses, motor drives, data backs, flashes, macro photography, micro photography; all contributed to a system that spanned several hundred pieces. 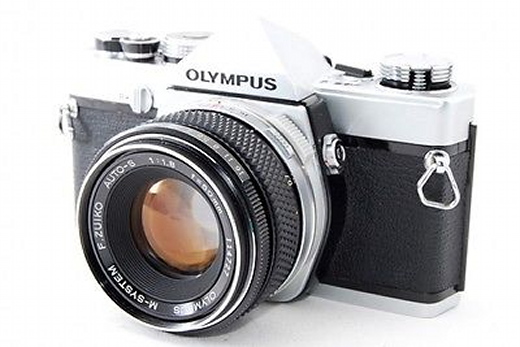 The first model introduced was the all-mechanical Olympus M-1 (1972), which was later renamed OM-1. The body included a full aperture TTL CdS exposure meter and a bayonet lens mount of a relatively large diameter. The series also saw the introduction of the Zuiko OM bayonet lens mount system and accessories which were standard for the whole range of OM bodies.

Starting off as a fully mechanical professional SLR model, needing only a battery for the light meter, the OM-1 comes with a through-the-lens exposure meter controlling a needle visible in the viewfinder. Introduced in 1973, the OM-1 was the first product in the OM Series. It took the world by surprise and earned wide acclaim as the world’s smallest and lightest 35mm single-lens reflex camera. 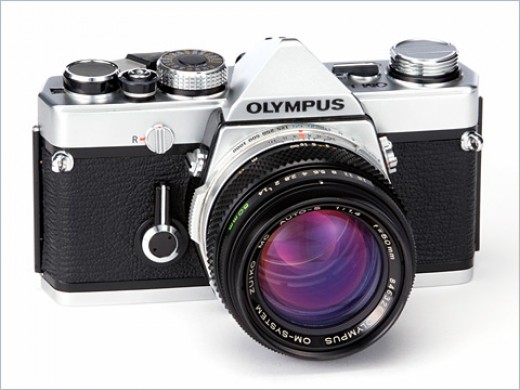 One feature unique to the OM1 compared to the rest of the OM system was its manual mirror lock-up making it ideal for astrophotography and macro-photography. The OM-1 MD (Motor Drive) was introduced in 1974, which enables a motor drive unit to be attached 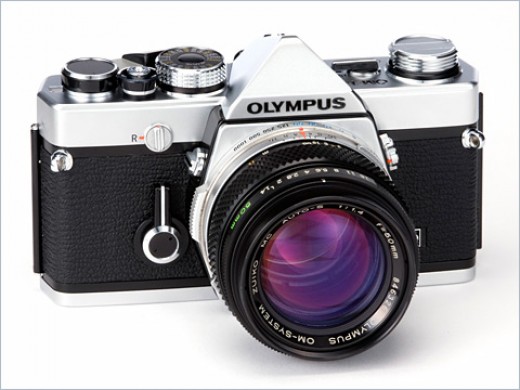 The OM-1n comes with a redesigned film advance lever, a flash LED in the viewfinder, and automatic X-sync regardless of the position of the FP/X switch when used with a T-series flash unit mounted on Flash Shoe 4. This camera went on sale in 1975, available in chrome or black. It features an automatic exposure (AE) system with an aperture-preferred shutter. The OM-2 also had the world's first TTL direct metering system, which measures light reflected off the surface of the film. 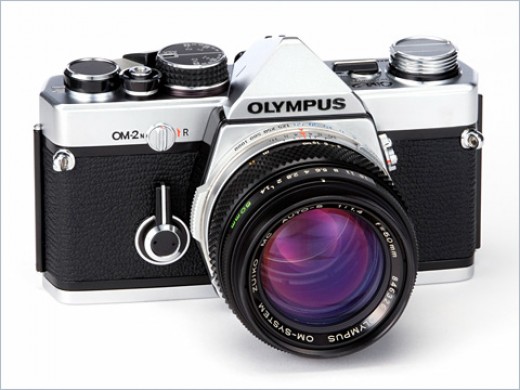 This allowed exposure control during shooting, and automatic TTL strobe adjustment using a specially designed strobe. To develop the TTL direct metering technology, Olympus collected 35mm film from throughout the world and measured the reflection ratios for each roll. The results were used to determine the density of printing on the shutter curtain. 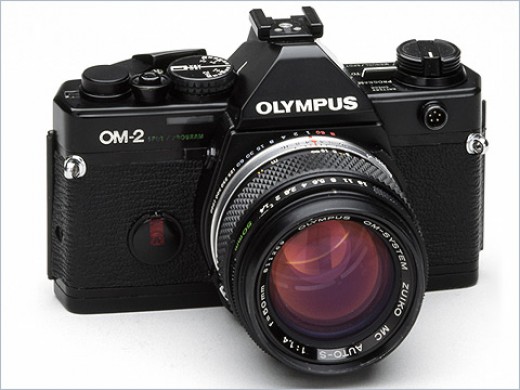 While the OM-2N was a slightly improved version, the OM-2SP (OM-2S in the USA) comes with a spot meter, Program mode, and a new meter display with a through-lit LCD bar graph display which now replaces the pointer needle technology. 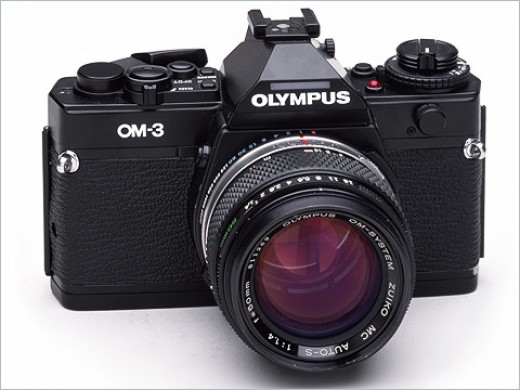 The OM-3, introduced in 1984, was an updated version of the OM-1. A manual camera without automatic exposure modes, and an entirely mechanical shutter, capable of speeds up to 1/2000 sec. The OM-3 features a multi-spot metering system (which is shared with the OM-4) in addition to the center-weighted metering of the OM-1.

The camera also featured an LCD display similar to the OM-4 which could be illuminated in low light. Its main advantage over the OM-4 was its ability to operate without batteries due to its mechanical nature. Batteries were only needed for the multi-spot meter and LCD display. It lacked a self-timer however. 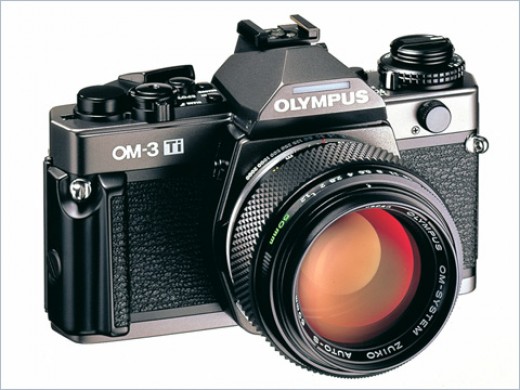 The OM-3Ti, featuring a titanium body and enhanced functions, was released in 1994, nine years after the OM-3 was discontinued. The camera shared the improvements over the OM-3 that the OM-4Ti held over the OM-4. The Olympus OM-3 is currently the most sought-after among Olympus OM SLR collectibles. 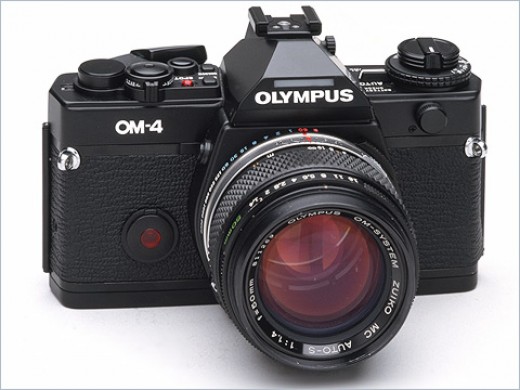 The Olympus OM-4, manufactured from 1983 to 1987, was an improved version of the OM-2. It comes as a battery-powered electromechanically controlled manual focus SLR with manual exposure control or aperture priority auto exposure. Same as with the others of the series, the OM-4 uses a horizontal cloth focal-plane shutter with a speed range of 240 to 1/2000th second plus Bulb and flash X-sync of 1/60th second.

The OM-4 was the first camera with a built-in spot meter which is capable of measuring eight individual spots for an average reading, and for center-weighted readings. An LCD display for the shutter speed is placed at the bottom of the viewfinder to precisely indicate its readings versus the actual camera settings instead of a needle. 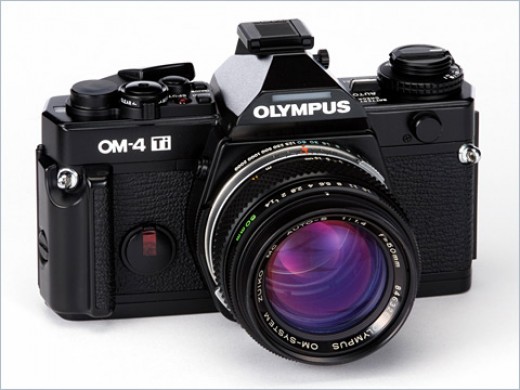 The OM-4 was updated to a tougher OM-4Ti (OM-4T in the USA) In 1986. It was an improved version, with titanium top and bottom plates, improved weatherproofing, and high-speed sync with the flash staying on during the entire shutter operation. This last version was finally discontinued in 2002. 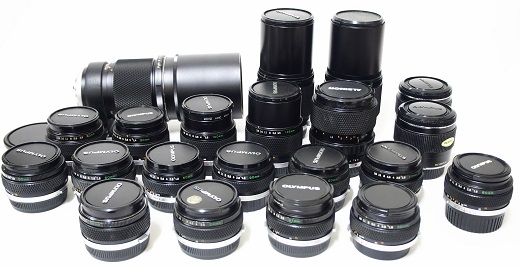 Different from the design of other SLR lenses, the OM Series lenses have the aperture control located on the lens barrel on the opposite side of the focusing ring from the mount. This was done to move it away from the shutter speed control, which is a ring on the camera body immediately behind the lens mount. The lenses also feature a depth-of-field preview button on the lens itself, as opposed to most other SLR camera systems in which the button is placed on the camera body.

The OM lens is designed to sit 46 mm from the surface of the negative film or slides, further away than many other lens systems. The combination of on-lens aperture control and this extra distance makes OM lenses manually adaptable to a variety of other camera bodies using lens-to-body adapters. 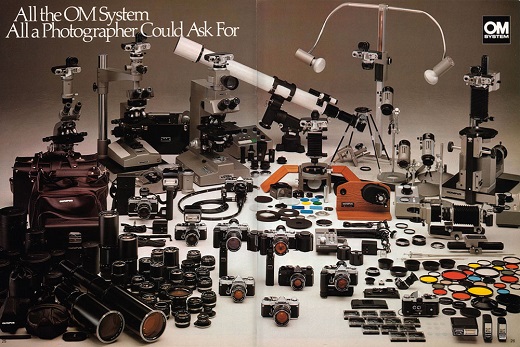 A complete range of system accessories was also introduced by Olympus for the OM system, some still being used today by Astro- and macro photographers. These includes: